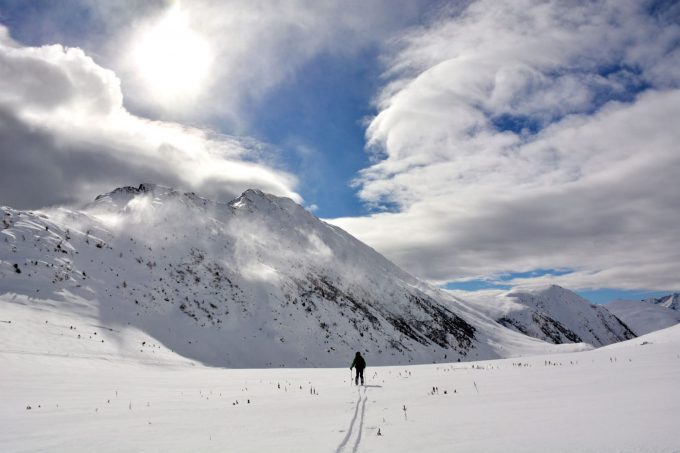 If you’d like to try ski-touring from Alpe d’Huez, here are one suggestion for beginner’ route that are easily accessible and, above all, magnificent. The slopes around the Col de Cluy are welcoming and nicely exposed.

About : Ski touring from Alpe d’Huez

SUGGESTIONS FOR SKI-TOURING on the massif of Grandes Rousses
> Discovery day route :
- La Grande Buffe (2164 m) + 500 m
The summit of the volcano-shaped Grande Buffe dominates the Col de Cluy. From Les Bergers, ski down to the Gorges de Sarenne, then put on your skins and either go due north or head for the Col de Cluy and then approach the summit from the west. Then you have the option of joining up with the Croix de Cassini.
- La Croix de Cassini (2373 m) + 700 m
The top of the Croix de Cassini can be reached from the Gorges de Sarenne or by traversing from the top of the Grande Buffe. The northern slopes are magnificent for downhill skiing and the summit rewards you with an impressive 360° view.

SECTOR of LES GRANDES ROUSSES
This small part of Les Grandes Rousses is one of the "great" for ski touring discovery. Around le Signal de l'Homme, le col de Sarenne or on le plateau d'Emparis : sun, panorama and gentle slopes. A big resort, a more intimate one or a mountain village: as many possible points of departure to discover :
Les Grandes Rousses : this north/south mountain range culminates in Pic Bayle (3465 m), conquered in 1870 by Father Bayle, an abbot from Oz-en-Oisans who allegedly spent more time on mountain faces than with his flock.
This crystalline massif, composed of gneiss, schist and granite, has caused some minor crystal, silver and gold rushes. The Brandes archaeological site, very close to Alpe d’Huez, was one of the first sites ever where silver was mined using almost industrial procedures. Years later, in 1908, it was coal that was being taken down the valley, using one of the longest cable cars in history.
Les Rousses overlook Isère, the Hautes-Alpes and Savoie, offering a wide variety of ski-touring opportunities.

/!\ IMPORTANT
Ski mountaineering and touring involves risks and all skiers are responsible for their own safety. Make sure you follow ANENA guidelines: anena.org

Depending on the snow conditions.

From Bourg-d'Oisans, follow signs for Alpe d’Huez on the D211, and park at "Les Bergers" in the resort.