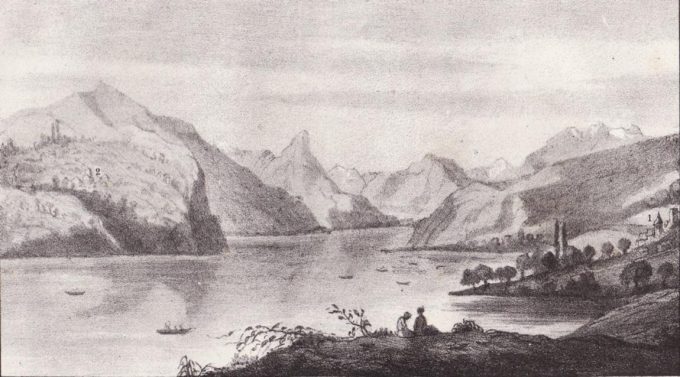 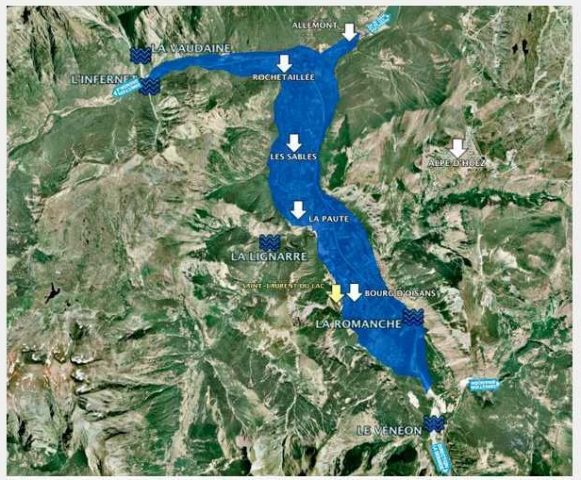 The Bourg d'Oisans plain was hollowed out over the centuries by glaciers, before being filled by sediment from rivers that formed a lake, called the Lac St-Laurent. On several occasions over a very long period, this wide valley has been a lake.

The Bourg d'Oisans basin is characteristic of the erosion and accumulation that occurred at the end of the tertiary and quaternary eras due to the glacial waters that dissected the mountainous mass, reducing it to a network of crests.
The successive lakes and deposits of rivers filled the valley with sediment, but the glacial rock bar was backed up by another rock bar formed by two alluvial cones from mountain streams opposite the current Pont de la Véna bridge (just outside Livet on the way to Grenoble). Upstream, the Romananche river formed a lake, the Lac St-Laurent, which was regularly emptied. Bourg d'Oisans was then called Saint-Laurent du Lac.
Prior to 1091, it is difficult to pinpoint an exact date as to when the lake was formed, although mentions of it have been found in documents dated 1058.
In 1191, the Infernet was the scene of a terrible drama, when a substantial rock fall and landslide completrly blocked the flow of the Romanche, creating an insurmountable barrier. This caused the lake to spread to over 18 km in length, submerging the plain under 10 m of water. St Laurent du bord du Lac completely disappeared under the water and all the local inhabitants had to flee their homes, seeking safety on higher ground. According to some documents, the water rose to a level of 741 m above sea level.
28 years later, on 14 September 1219, the dam suddenly burst, creating a catastrophic flood that reached as far as Grenoble (known as the "Flood of Grenoble") killing some 5,000 people.
The natural dam had given way under the sheer weight of the water and an enormous volume of water rushed into the gorge with the violence of a hurricane, sweeping away everything in its path, whether trees, fields or whole villages...
Although smaller in size, the lake continue to exist for another three centuries, sometimes increasing in volume, as on 4 August 1465 after a terrible summer storm.
In 1429, it was recorded that the lake had dried up, only to return at a later date.
In 1540, reduced to a "puddle", it finally disappeared...
Over the following centuries, the Romanche wended its way through the plain, causing regular floods. In the 18th century, dykes were built to contain the river and the plane was drained using the grid system that now makes for an original landscape. Once the plain had been restored, plans were made to clean it up and grow crops.
Back in the 13th century, just after the 1219 catastrophe, the village of St Laurent became the centre of interest for all the local population and villages. The tantrums of the Romanche were only contained once and for all in 1935, with the construction of the Chambon Dam.

A stroll through the Bourg (Circuit...