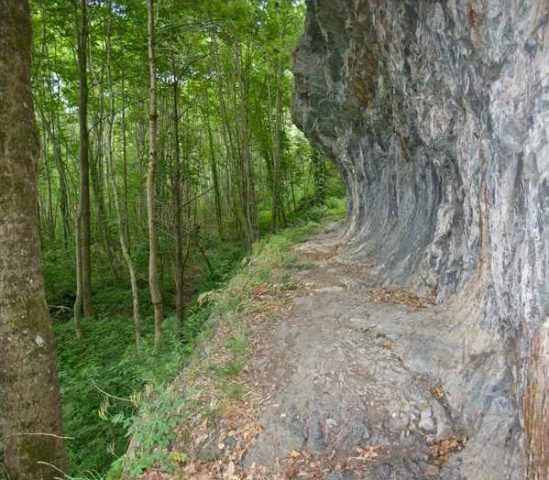 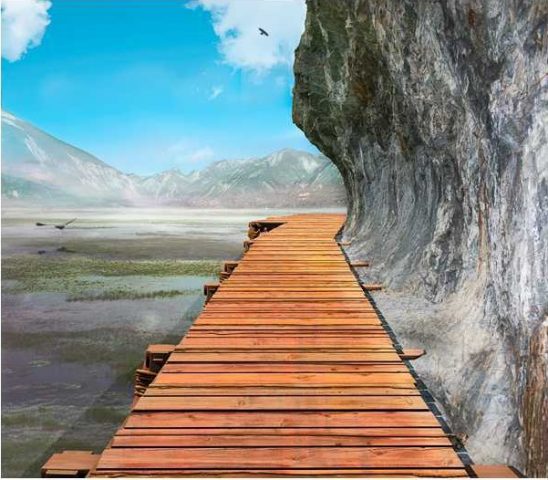 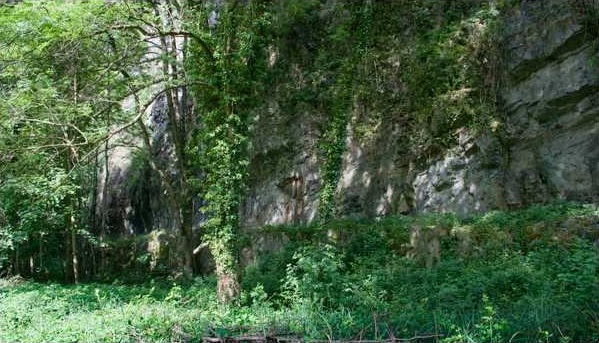 Rochetaillée lierally means "cut rock" in French and looking up at the road carved out of the cliff face, it is clear how the village got its name. However, the exact origin of this road appears lost in the folds of history.

Is this road, as many people believe, the remains of a Roman road, the indelible mark of an unstoppable sovereign population? Or, as Doctor Roussillon suggests in his Traveller's guide to Oisans, is it "the still visible trace of a path created during the existence of the lake, along the bottom of the neighbouring mountain and behind the small hamlet of Rochetaillée, from which it draws its name. Such were the circumstances in which this path was built."

An observor at the end of the 19th century reported certain similarities beween the Porte des Bons and the Rochetaillée road, suggesting a close correlation between the two. Marks and tracks on the ground were reported to be similar and of exact equal width. Unfortunately, no trace of these marks has been found since and the campaign to clear and clean the site carried out by in 2004 by "Customs and Traditions of Oisans" also failed to uncover any evidence.
To better understand this, it needs to be remembered that in the last century, the plain through which the road passes was like a desert without any vegetation. Both the cliff and the plain were completely bare, meaning that it was no doubt easy at the time for witnesses to observe and note the smallest details. These days, the road is virtually covered by vegetation and in some places, you can almost walk past without noticing it.
But why carve the road out of the rock? If we go along with Docteur Roussillon's theory, the creation of Saint-Laurent lake would be the only tangible reason for this project, which must have involved considerable manpower and resources.
The other theory, if we consider this to be a Roman road, suggests that any rapid progress towards the high mountain passes was hindered by the neighbouring plain. Perhaps it was a swamp or a lake that was liable to flooding due to the unpredictable behaviour of the Romanche river? The size of the project to build the road would also prove the importance of the "Oisans way" in the eyes of the Romans.
Along the entire length of the platform, rectangular markings are carved out of the stone at regular intervals. These suggest that a structure consisting of beams and a wooden floor covered the road, widening it from 2 metres to 3 or 4 metres and making for easier progression. At suitable points, wider platforms were installed, known as "garages" that served as passing places for animals and carts.

To this day, the track linking Rochetaillée to Bourg d'Oisans, via the hamlets of La Paute and Les Sables, is known as the "Chemin Romain".

The loop of the passes

The tour through the plateau of...