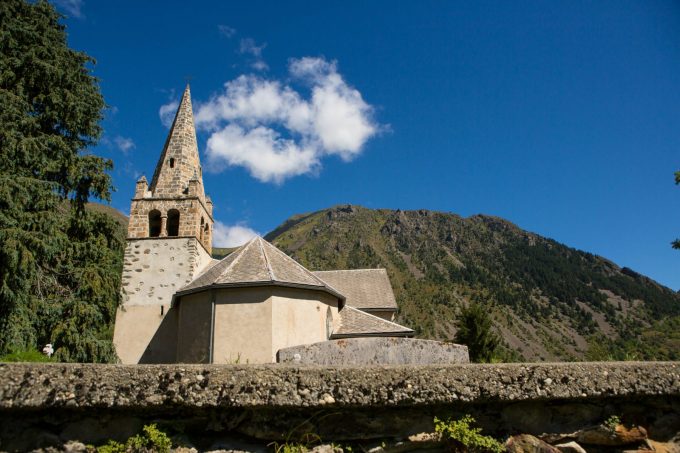 Saint Arey was the Bishop of Gap between 579 and 614. Born into a noble Gallo-Roman family, he was ordained priest, and then Bishop of Grenoble, before continuing his vocation in the Triève and in Gap. Documents proving existence of the church date back to at least 1096.

A number of legends are associated with the life of Bishop Saint Arey, but the most famous is the legend of the bear:
On his way back from Rome in 605, Arey travelled over the Col du Montgenèvre on his way to Gap via Briançon. In the woods, his carriage came across a bear, which scared away one of the harnessed oxen. Arey then ordered the bear (or made a pact depending on the version,) to take the place of the ox under the yoke. The submissive animal allowed itself to be harnessed and the Bishop arrived in Gap pulled by one of the most original teams ever seen. The bear was freed and took refuge in nearby woods. According to the legend, the bear only emerged on the day of the Bishop's burial in 614.

The church that we see today was built in 1840. with the first stone, blessed by the Bishop, laid on 11 May.
Once the church was consecrated, a lead box sealed with the arms of the Bishop and containing the relics of several saints was placed in the tomb of the high altar, which was not consecrated itself. The former church had been dedicated to Saint-Arey and he remained patron saint of the new church.

Shortly after it was built in 1878, the church received a visit, as recounted in a document of unknown origin:
" The church, isolated on a rock overlooking the Romanche river, stands several stories high at an altitude of 982 m. It was rebuilt in 1841 and is shaped like an ogival-style Latin cross. The solid, old bell tower has been kept, although it is in the 11th century Roman style. The chimes are very pretty, even though the bells are not heavy. The church portal is truly remarkable, built with a type of large grain porphyry - a rare stone that is found locally. The interior of the church is very simple, without any decoration or stained-glass windows. The altar is made of white marble and is rather elegant. Some pictures of certain merit decorate the Sanctuary, representing Saint-Arey, the patron of the Parish, talking with Pope Gregory VII."

All year round, daily.

The climb up to 2 Alpes

The hamlets of La Grave