A unique village in oisans, for its charming architecture

As you wander around the narrow streets of Besse-en-Oisans, you’ll be taken aback by the charm and complete silence all around. All your other senses are awakened, as you take in the peaceful atmosphere of the village…

The stone buildings will tell the story of the harsh mountain life here at an altitude of 1,500 m, as well as the fantastic community spirit between the farmers who work together and are fiercely passionate about their little village in Oisans.

Here, minerals are everywhere: the cobbled streets, the walls of the houses, the barns that would usually have a wooden framework, the wash houses and even the ancient roofing.
The simple charm of small mountain villages has most definitely found its ambassador in Besse-en-Oisans. Come and visit this relaxing little village, wander the streets and explore to your heart’s content…

Why is besse a classified village?

This village was added to the list of picturesque places in Isère in 1983 thanks to the architectural quality of the houses in Besse, that really stands out when compared to other villages in the area.
These ancient farms were entirely built using local stone, from top to bottom, and they perfectly represent the construction techniques of the past. This expertise has been recognised by the Bâtiments de France architects because the locals of Besse built their houses themselves, using the materials available to them, and they have been standing for centuries.
Besides the obvious remarkable nature of this architecture, the peaceful, calming atmosphere that you can feel here as you wander the streets also explains why this village features in the list.

Since then, the Batîments de France architects have kept a close eye on the buildings in Besse and in the hamlets of Bonnefin and Le Sert. Any plans for renovation, construction or demolition must be approved by an architect to ensure that the building work does not have any adverse effects on the overall appearance of the village.

A closer look at Besse-en-Oisans

“Besse” actually means birch trees in a local dialect, and these trees once surrounded the village. However, when vast forest areas were cut down to make way for farming land, wood was in scarce supply. This rare commodity was therefore not the chosen material to build houses, as can be seen elsewhere in Oisans where only the ground floor, including the stables and living quarters, were made from stone and the upper floors and barn were built using wood. This shortage was actually an opportunity for Besse because the houses made entirely from stone were built to last, and the village remained as such for centuries.

“Even a hundred years ago, the appearance was identical. The residents of bygone days left their mark here, for good”.

A spot of geography

The village of Besse stands on a south-facing slope, which makes it the ideal location for a village, thanks to the presence of water, a more gentle mountain slope, great sun exposure even in winter, and it’s also very close to a vast area of greenery, the Alpine pastures of Emparis plateau. Today, this is the ideal location thanks to the peaceful surroundings, so that locals and visitors alike can come here to enjoy the simple things in life, surrounded by the beauty of the great outdoors.

Besse has not always been considered a remote village, far from the main roads between Grenoble and Briançon, between France and Italy. In the past, the village was on another key communications route of that time, the route to Savoie.

For centuries, Besse was in fact located on a major communications route between France and Savoie, which then became French only in 1860. The boundary between the towns of Saint-Sorlin d’Arves and Besse-en-Oisans was actually a border. Under the reign of Louis XIV, a military camp was set up in the summer on the Col des Prés Nouveaux to watch over the border. All the necessary supplies, including food and ammunition were in Besse, in a building built especially for the “barracks”. Travellers, tradespeople, cattle and merchandise passed over the mountain pass. There was a customs office in the centre of the village, today a café/grocery store.

That’s most probably why the population of the village reached 1,200 in the 19th century!

Electricity arrived in Besse in 1931 thanks to the construction of Chambon dam between 1929 and 1937, when it was commissioned! The Haut-Oisans Intercommunal Union created on the 6th January 1927 was in charge of supplying electricity to the 6 villages: Besse, Clavans, Mizoën, Le Freney, Mont-de-Lans and Auris.

The mark left behind by the locals of bygone days

The robust houses throughout the village bear witness to the farming past. The architecture includes features that showcase the former farming purpose of the houses. The buildings were made with blocks of shale or tufa stone and the roofing was covered in either slate or shingles, therefore showing us that using stone in construction can be just as much a technical art as it is beautiful to look at.

The locals built their houses themselves using materials that were available to them: stones from the mountain streams, flat pieces of shale rock, slate from the hamlet of Bonnefin, soil for the mortar and birch tree trunks for the wooden framework. A typical house was therefore built using only local materials. It was built into the mountain slope, with stables and the living quarters on the ground floor, often in one single room. There was only one entrance, used by both animals and people. On the first floor was the barn, where straw and hay would have been stored.

On the front of the house is a wooden balcony, that was used to dry twigs and “blaittes“, little compacted blocks of sheep manure, used for the fire when there was a shortage of wood. You’ll also notice the triangular-shaped holes in the walls, the purpose of which was to provide ventilation for the hay.

The roofing was built on a gentle slope so that the slate wouldn’t slide off. Houses with a more sloping roof are more recent. Today, the roofing is built using sheet metal which is easier to install and more lightweight.

A stroll around the “calades” of Besse

To really take in the charm of this stone village, take a stroll along the “calades”, the cobbled streets made using stones from Guay stream. These steep, narrow streets wind around past the houses, leading to a small village square with a wash house that is also made from stone, then a little further on, you might end up at the bakery… On either side of these very narrow streets, the houses are very close together and give the village an impression of being surrounded by a sort of “shell”. Walk up to the top of the village and you’ll see this effect with your own eyes!
There were advantages to building the houses so close together: they were close enough to protect each other from the cold temperatures and heavy snowfall, and the flat land was optimised.

The church we can see today is actually quite recent as it was built between 1869 and 1877. The former church was too small for the population of one thousand at that time. It was renovated in the 1990s according to the original plans. You can explore other features of the religious heritage of Besse on the Sentier des Oratoires trail and by witnessing the blessing of the herds on the Alpine pastures in the summer.

Would you like to come and visit the village of Besse?

We won’t spoilt the surprise any further. If after reading this brief presentation you want to come and enjoy the peaceful atmopshere in Besse-en-Oisans for yourself, come to the Maison des Alpages and follow a guide on a tour around the cobbled streets. On a tour of this village, you’ll find out all about life in Alpine territory… 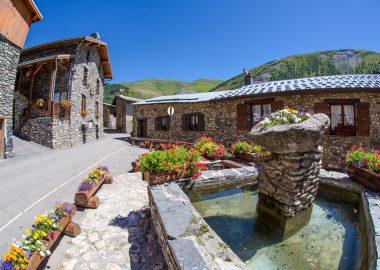 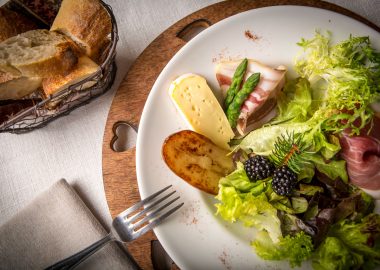