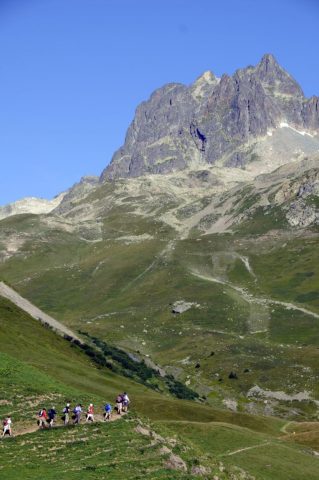 This is one of the most spectacular 360° views, from which you can admire the Meije, Muzelle, Pic Blanc and Aiguilles d'Arves. If you're lucky, you may spot marmots, lammergeier vultures and chamois.

Park at the Col de Sarenne (1999m), from where you can walk to the Croix de Cassini along the ridge. Take care though, as, although not marked on maps or signs, this route (the most direct) does have a few tricky sections. So, even though the view from the ridge is amazing, this route is only suitable for sure-footed hikers.
More cautious hikers should carry on down the road a little after the Col (towards Alpe d'Huez and some chalets) and take the path to the Col Grange Pellorce from Le Sella (on the left). This is a slightly longer route (around 90 minutes to reach the top), but it is safer underfoot. If you're lucky, you may spot marmots, lammergeier vultures and chamois. Once at the Croix de Cassini (2361m), your efforts will be rewarded with a unique panoramic view over the surrounding peaks and valleys.

In the 18th century, César-François Cassini was assigned the ambitious task of mapping the Kingdom of France. His name has been given to a number of summits, including the Croix de Cassini, which he used to make his measurements. Cassini maps, which were drawn over 250 years ago, are as precious as our modern IGN maps.