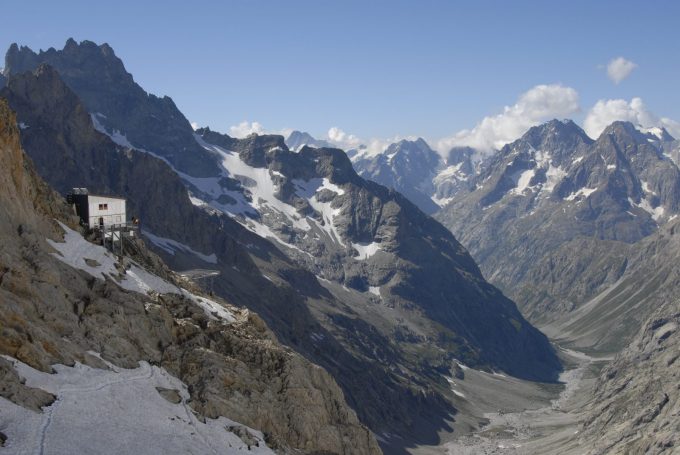 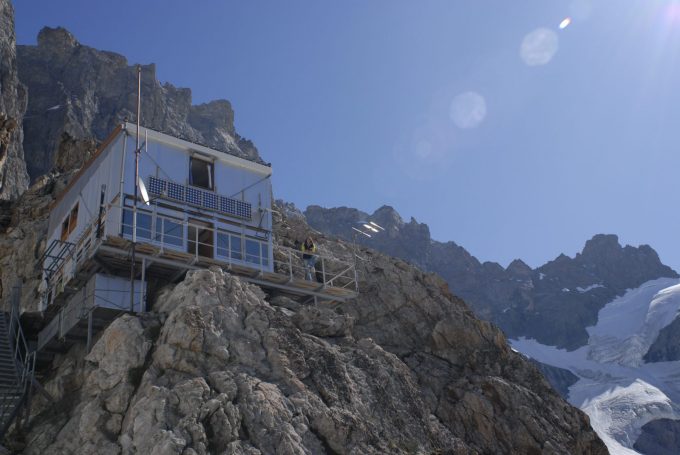 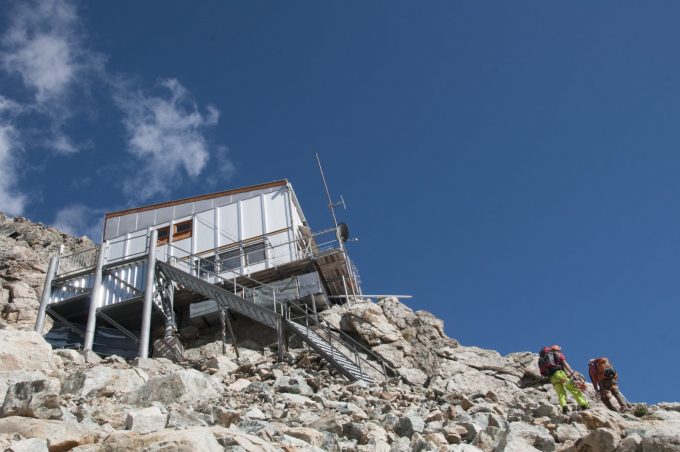 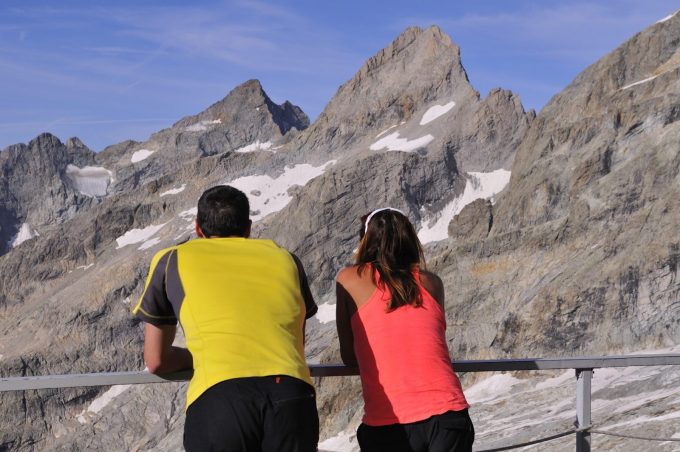 From La Bérarde, the route first passes by the refuge of Le Châtelleret. Leave on your left the path that leads to the Col du Replat, then walk towards the wide moraine that separates the small valley, where there may be some snow patches to cross.

Follow then the path on its long ridge to the impressive rock promontory where you’ll find the refuge.

ITINERARY
- Either climb the ridge below the hut, thanks to the cables fitted over 150m to make your climb easier. A harness, a helmet and a via ferrata lanyard are recommended (blue marks).
- Or walk horizontally to your left, and walk around the alluvial fan of the glacier and the rocky shelf, then climb left-hand towards the bottom of the glacier. Then pass through the slabs of rock, horizontally below the glacier, before reaching the refuge by a snow patch (early in the season) or by the rocks (red marks and cairns).
In both cases, it is no longer a walk on the path, but a real first step in the high mountains, to a prestigious refuge with access to races that are not less.

TO SEE
Mountaineering and climbing
- The Traversée de la Meije (3982m): the route par excellence from Le Promontoire, that reminds the historic exploit of Pierre Gaspard and Emmanuel Boileau de Castelneau in 1877. The route itself is subtle and complicated, and it gives credentials to this aesthetic, varied and challenging climb - a great classic of the Alps, always highly-prized.
- On the south face, a number of routes have been opened between the direct of Pierre Allain and the modern routes, on a very good rock.
- The south-west face also offers beautiful classics: the « Voie des Marseillais », « Nous partirons dans l’ivresse »…
- The west ridge of La Pointe des Aigles (3338m) may be a fallback when uncertain wheather.
- The east face and the north east ridges of Le Rateau (3809m), mixed ascents in the early season.
- The Brèche de la Meije (3357m) is ideal to begin mountaineering, with the opportunity of crossing over to the refuge of L’Aigle via Le Serret du Savon.

TO KNOW
In spring, the refuge is the stage for several musts of mountain skiing : the Tour de la Meije via La Brèche and Le Serret du Savon, that comes out on the magical descents of L’Homme or Le Tabuchet and Les Enfetchores, with the descent back to La Grave. A last quality route: the Col du Pavé followed by the descent to the Haute-Romanche.

Artist in residence at the Refuge...