Type something then push « Enter »

The history of Allemond has been marked by the mining industry and Alpine agriculture. Vieux Allemond, around the church and along the road leading to the Mairie, still has the traditional characteristics of Oisans villages. 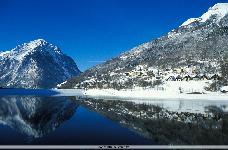 Allemond was known for its mining under Louis XIII and XIV, housing royal foundries (behind the tourist office), in which minerals mined around the village, mainly silver, lead and copper, were melted.
For many years, the Hotel des Tilleuls (now closed) occupied some of the buildings of the former royal foundry. This hotel, featuring a superb walnut staircase, was bought in the 1920s by a former mayor of the village. His two daughters, Raymonde and Margarete, were well-known local characters who ran the hotel for many years. It was even rumoured that Napoleon III stayed there. Until the 1960s and 1970s, people lived very simple lives, nearly all as farmers.
Then at the end of the 1970s, the Grand-Maison dam project was launched, providing a huge economic boost for the village and the region as a whole. The project lasted 10 years and brought many thousands of workers to the area.

These days, the village lives mainly from tourism, both in summer and winter.