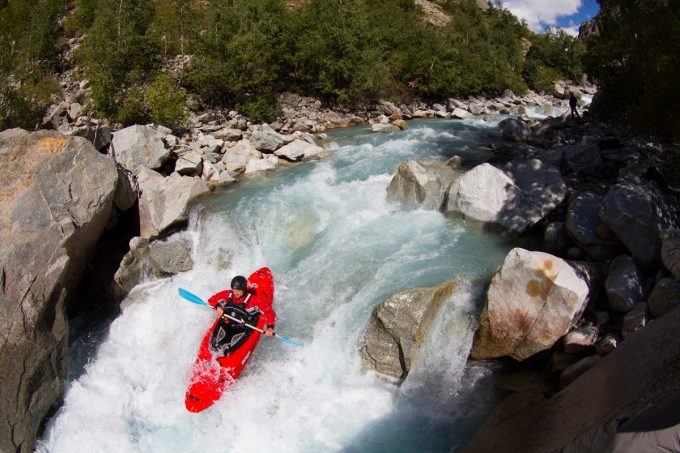 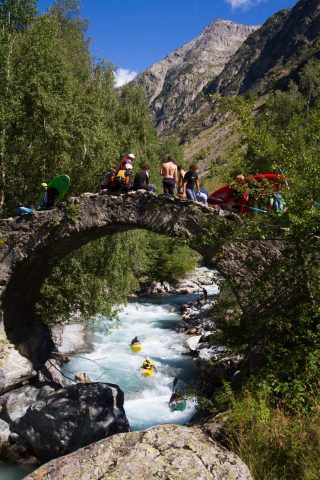 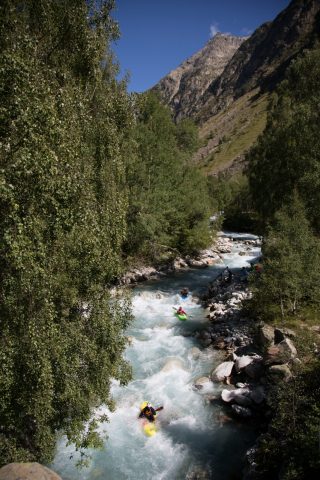 Two "Derbys" in one:
- a "Petit" Derby for everyone
- a "Grand" Derby for the craziest.
It's a great day out on the banks of the Vénéon between La Bérarde and Les Etages.
Music in the evening, drink stand and meal.

The Vénéon Derby originates from a passion for mountain sports and for the Vénéon river. Having descended this fast-flowing mountain river endless times, we reckoned the Vénéon deserved an annual event. Inspired by the skiing Derbys, particularly the one in La Grave nearby, we decided to follow the same principle, in other words, instead of hurtling down the mountainside against the clock, we would do the same in kayaks on the river, creating a unique event.

*** Petit Derby: open to experienced kayakers in class III, aged at least 16.
Teams of 3 paddlers will set off the stopwatch below the straight line and kayak to Les Etages.
Option: slalom on the La Bérarde straight line "Rapide de Pierre Noire", Class IV

***Grand Derby: 2 events open to teams of 3 experienced kayakers in class IV and above, aged at least 18.
Event 1: slalom on the La Bérarde straight line "Rapide de Pierre Noire", Class IV
Event 2: The race, with a new starting point this year at Les Etages, down to the Pont du Rajat in Champhorent, class IV and V.
This descent incorporates all aspects of upper river navigation, including difficult class IV/V rapids, compulsory lines, some carrying and a class V rapid, to be tackled one by one.

From 6pm onwards - Meal and concert at La Bérarde campsite, everyone welcome!

Access: be careful due to the "Marmotte" cycling race, the road will be temporarily closed on Saturdays at the following times and places:
D1091 closed from 6.45 am to 8.30 am between the agglomeration of Bourg d'OIsans and Rochetaillé (in both directions of traffic).
D1091 closed from 12 p.m. to 6 p.m. between the Clapier d'Auris and Col du Lautaret (only in the direction of Clapier d'Auris -> 2 Alpes)